What would a homestead be without a root cellar?

A lot of vegetables that are grown right here on the homestead end up being stored in the root cellar for winter eating. Let me show you how it can be done.

Situated right next to our house is another underground building. Farmer Hick did not connect this directly to our house, one of the things he’d do differently now. There’s a 3-4 foot wall of dirt between the house and the cellar, retained by railroad ties (you can’t see this because the whole wall is covered in board and batten). Three sides of the cellar are hidden in the ground, the Southern side contains the door.

The cellar measures 10 x 10 feet, opposite the door are the shelves that hold our dairy, eggs and fresh food in winter, the squash and pumpkins from the garden, our basket with citrus (that we buy). This shelving also holds jars of fresh, homemade stock and soup that will not fit in my ‘smallish’ fridge. It’s also a good place to store casseroles that have been made ahead, just be sure they have a good cover on them because we do occasionally have visiting mice. 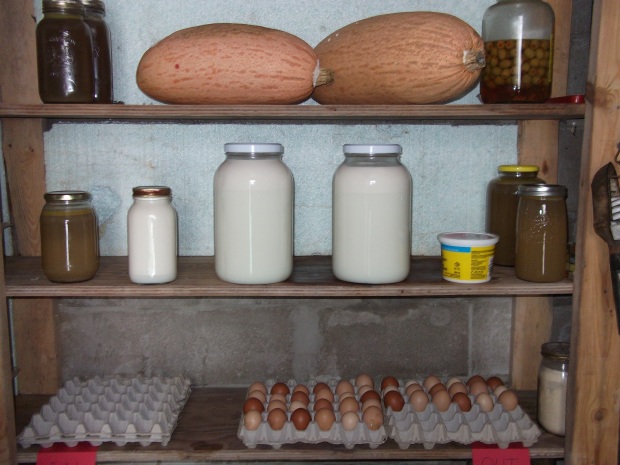 small section of shelving at the back

The west wall contains the carrot and potato bins. 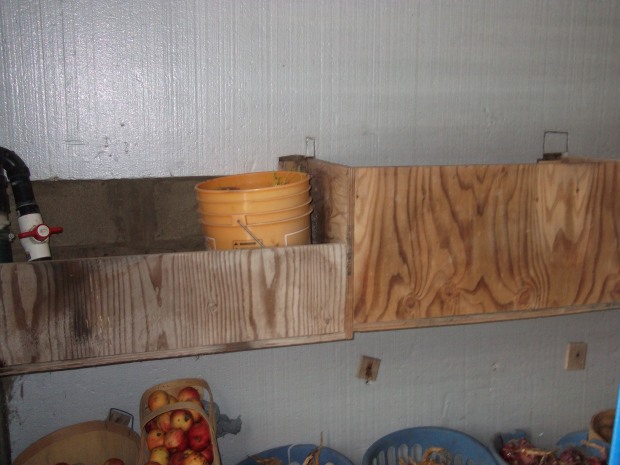 As large as these boxes are I still end up putting several bushel baskets with surplus underneath these boxes. This is also the place for my baskets of fall harvested onions. 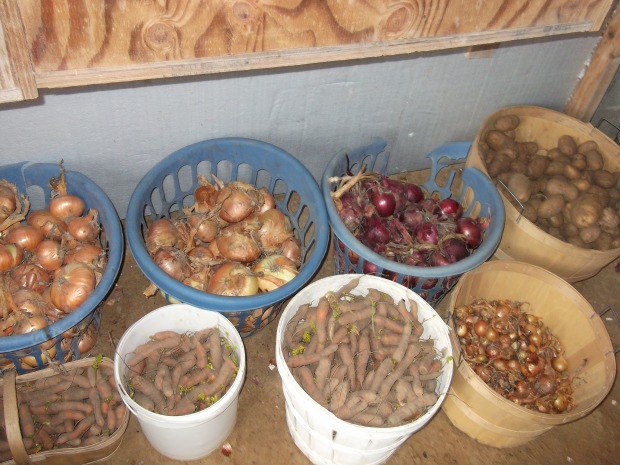 onions and surplus carrots and potatoes

Other vegetables that I’ve successfully stored in the cellar are; cabbages, leeks, beets, parsnips, pumpkins and celeriac. You do have to be vigilant and check the stored produce regularly. At the first sign of some vegetable going moldy, just remove it, check the vegetables that were touching it for further mold (usually there is none), this way most food stays good for months. An exception to this would be the squash and pumpkins, rarely will they keep beyond January or mid February.

Against the East wall is our water set up. Of course the water supply system doesn’t have to be in a cellar but we don’t have a basement and this was the next best place for us. The wall is covered with water pipes and the water pump, plus a hand operated water pump. From left to right the first water line (horizontal) goes to the barn, the middle one (upright) fills the large tank, the third goes to the garden. The wider pipe on the right is connected to our hand pump. We like to store several gallon buckets underneath the hand pump so that it’s easy to grab a bucket full for the many homesteading chores outdoors that require water.

Farmer Hick set up the water system so that it’s not dependent on electricity, just in case something weird happens, like a SHTF (Shit Hits The Fan) situation.

The flooring is sand, dirt floors are best for a cellar because they keep things damp. High humidity is what prevents the food from shriveling. Ventilation is needed as well to keep the air circulating, an air intake opening is placed low, an air outlet opening is placed higher up. When it gets too cold we sometimes need to plug the intake opening, both openings need to be covered with a screen to prevent rodents from entering the cellar.  The walls were built out of cinder blocks and filled with concrete. Several  walls have since been covered with insulation to keep the cold out in winter and to keep the cellar cooler in the summer. The average summer temperature of the cellar is 15 degrees C (59 F), in winter it hovers around 2 degrees C (36 F). During very cold winters, or a cold spell we used to light an oil lamp overnight to keep things from freezing. In later years, as things have improved and have become more sophisticated, we’ve used a small Wabasto diesel powered heater (the same little heater they use in trucks). The heater runs for about 30 minutes, raises the temperature a bit and keeps things from freezing. This very mild winter the cellar temperature has not gone below 2 degrees C yet, so we’ve not had to use the Wabasto, I hope it stays that way.

Right beside the door sits a large blue tote that holds my soil and compost mix that I need for spring planting when I start all the seedlings indoors. On top of that box I keep various smaller baskets with an assortment of apples. Looking at this picture below, I see that the apples have to be used up, apple crisps and pies will probably be on the menu soon here on the homestead.

On top of the cellar sits the little building that holds our 1,000 gallon water tank that I’ve mentioned in another post.

the cellar with the water storage building

Some people think we’re nuts to live the way we do, growing all that food, then preserving some and storing away a lot, but I think it’s quite normal (and healthy). Less than a hundred years ago most people grew their own food and preserved it in a variety of ways to ensure they would have food come winter. It doesn’t bother me to be called nuts or crazy, to me living this way is very satisfying and rewarding and I’m ever so thankful for our little homestead.